The guide to International Trade Regulations

Buying and selling goods in the international trade system can often be complicated with responsibilities, cost and risk to all parties needing to be determined.

To help you in the import and export of trade, the International Chamber of Commerce (ICC) introduced the International Commercial Terms (Incoterms®), which act as the world’s essential terms of trade for the sale of goods. Whether you are completing a purchase order, packaging and labelling a shipment, or preparing a certificate of origin, these regulations have become part of our daily language of trade and are there to guide you.

Since the first publication of the rules in 1936, the ICC has been maintaining and developing them ever since. To help prepare businesses for the next century of global trade, the newest edition, Incoterms® 2020, came into effect on 1 January 2020 and should be referenced going forward.

The Incoterms® rules feature a series of three-letter trade terms which all have very precise meanings for the sale of goods around the world.

Rules for any mode or modes of transport:

Often used when making an initial quotation for the sale of goods without any costs included, EXW means that the seller makes the goods available at their premises or at another named place (works, factory, warehouse etc). The seller does not need to load the goods on any collecting vehicle, nor does it need to clear the goods for export. 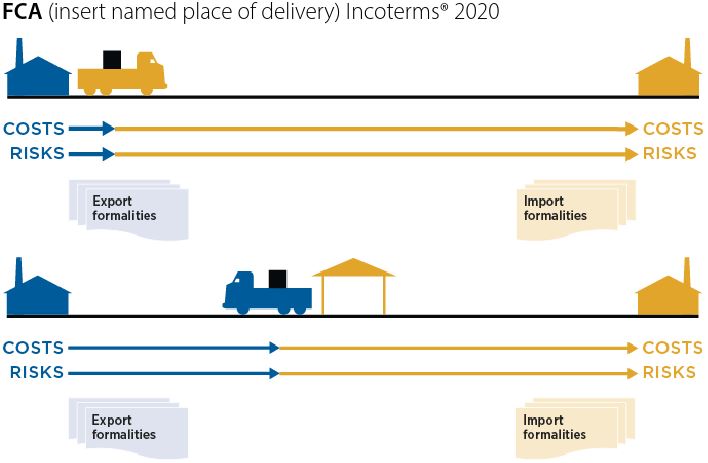 Under CPT the seller pays for the carriage of goods up to the named place of destination.

CIP – Carriage and Insurance Paid to (named place of destination)

Similar to CPT with the exception that the seller is required to obtain minimum insurance for the goods while in transit.

The seller is deemed to have delivered when the goods are placed at the disposal of the buyer on the arriving means of transport and ready for unloading at the named place of destination. Under DAP terms, the seller needs to manage all risks involved in bringing the goods in.

This Incoterm requires that the seller delivers the goods, unloaded, at the named place. The seller covers all the costs of transport (export fees, carriage, unloading from main carrier at destination port and destination port charges) and assumes all risk until arrival at the destination place.

FOB – Free on Board

The same as CFR with the addition that the seller must also obtain minimum insurance cover against the buyer’s risk of loss of or damage to the goods during the carriage.

The Incoterms® do not constitute a complete contract of sale, but rather become a part of it. For its application, the following structure should be used:

If a different year is stated, e. g. Incoterms® 1980, then respective terms apply.